To find out how the latest Victorian Government Circuit Breaker lockdown restrictions have impacted our services, visit our COVID-19 Council services update webpage.

Climate change is a key focus for us. We’re working on a range of initiatives to reduce our carbon emissions and minimise the impacts of climate change. We also want to support you to do the same. Find out more information.

What is Council doing to reduce its carbon footprint?

Council is actively working to reduce its carbon footprint; we:

Our Environmental Sustainability Strategy 2016-2021 sets a target of zero net carbon emissions from Council operations by 2030.

At a special meeting on Tuesday 5 May 2020, Council passed a motion to declare a climate emergency. Council also committed to an ambitious new carbon emission reduction targets: 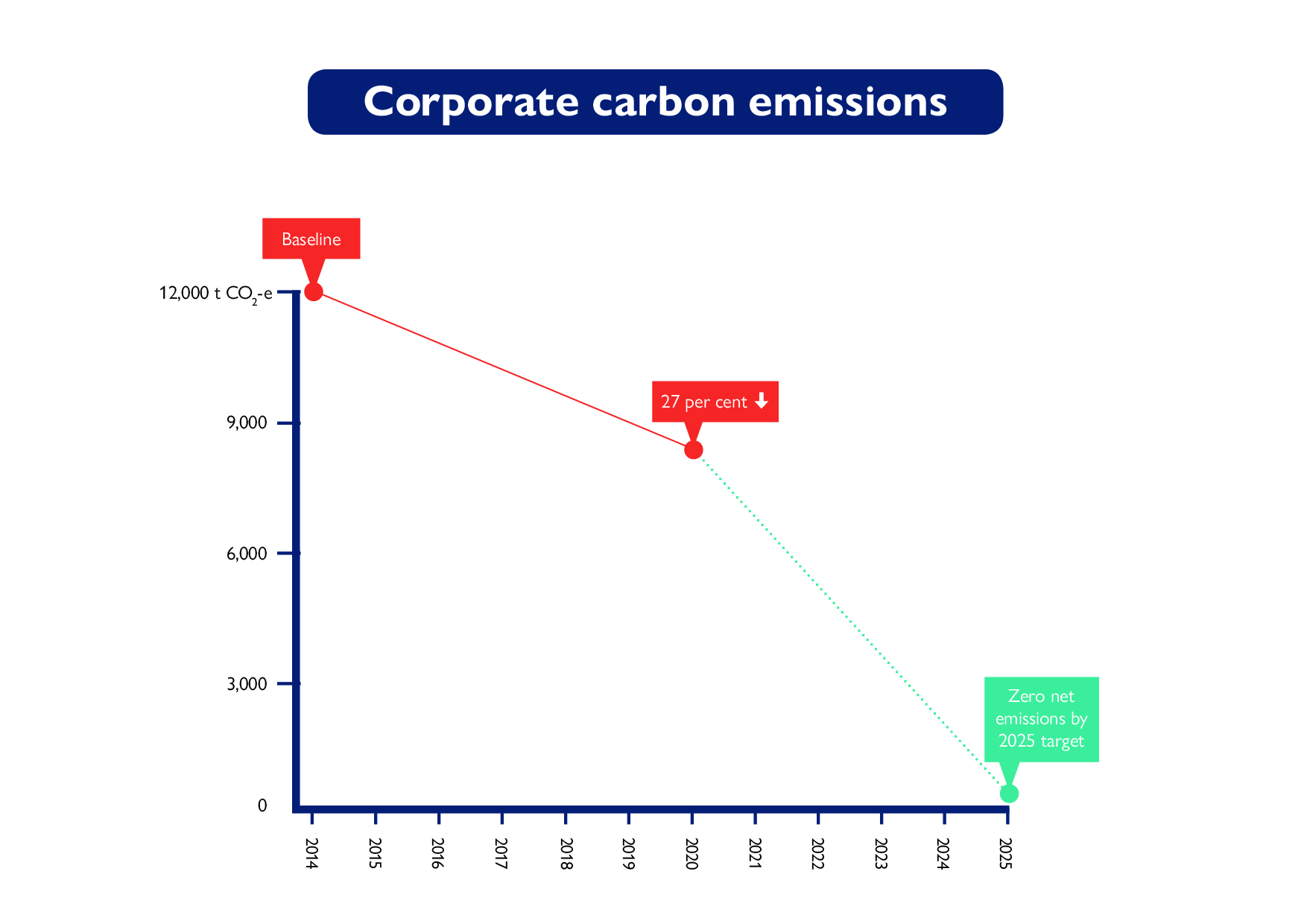 Here are the key initiatives we are working on to reduce our corporate carbon emissions.

We are proud to be one of 46 Victorian Councils to join together and form VECO, the Victorian Energy Collaboration. VECO is the largest emissions reduction project ever undertaken by the local government sector in Australia. From 1 July 2021, renewable energy will be used to power council-owned infrastructure, like our streetlights, libraries, aquatic centres and pavilions. By using renewable energy, we’ll be saving 260,000 tonnes of carbon emissions from entering the atmosphere — the same as taking 90,000 cars off the road. This initiative will cut the emissions generated by our own operations by over two-thirds (based on our 2019-20 emissions profile).

Between 2012 and 2019, we upgraded 6,710 streetlights to energy-efficient T5 fluorescents and LEDs. These upgrades have cut Council’s street lighting energy consumption roughly in half. We’ve saved $2.58 million in energy and maintenance costs, and by 2040, cumulative savings will be $19.02 million. We’ve also avoided 9,357 tonnes of carbon dioxide. This is equivalent to 2,022 passenger vehicles driven for one year.

We’ve included ESD features in many Council buildings to reduce their energy and water consumption. At GESAC, there is an evacuated tube solar hot water system, LED lights, a stormwater harvesting system with a capacity of 200,000 litres and water-efficient toilets, showers and taps. All new capital works projects have an allocated budget of 5% for ESD features.

In an Australian first, we have installed smart photo electric cells on 205 streetlights throughout Glen Eira. These cells can be remotely dimmed, allowing us to decrease our electricity use and carbon emissions. The trial halved electricity use.

We’ve installed solar photovoltaic systems on 50 Council buildings. These systems have a total capacity of 949,516 kilowatt hours. That’s enough to power 114 homes for one year.

LED lighting upgrades have been carried out at many Council buildings. LEDs are the most efficient form of lighting and last much longer than other forms of lighting.

Use of recycled concrete

Recycled concrete is used in road and pavement bases and backfill in drainage trenches. This reduces our carbon emissions, use of virgin materials and the amount of building waste going to landfill.

We plant at least 1,000 trees each year. Trees cool the air and so reduce the urban heat island effect; reduce storm water run-off by allowing rainfall to infiltrate into the ground; absorb air pollution; provide habitat for birds, mammals and insects; reduce wind speeds during storm events and absorb up to 150kg of carbon dioxide per year.

We've created a Classified Tree Register and local law to protect our most valuable and important trees.

Local communities often can’t easily reduce their environmental impact on their own and local government has limited options to solve these problems. We advocate for changes in state and federal policy such as better public transport, higher standards for buildings to help reduce energy consumption and new generation waste and recycling facilities for the region. We undertake our own advocacy as well as through the Eastern Alliance for Greenhouse Action (EAGA) and the Inner South-East Metropolitan Partnership’s Regional Sustainability Advocacy Strategy.

Who are we working with?

The Eastern Alliance for Greenhouse Action (EAGA) is a formal alliance of eight councils in Melbourne’s east. EAGA is committed to delivering mitigation and adaptation projects and advocating for initiatives that support sustainable and low carbon communities. Members include the City of Boroondara, Glen Eira City Council, Knox City Council, Maroondah City Council, City of Monash, City of Stonnington, City of Whitehorse and Yarra Ranges Council.

Climate Emergency Australia is a newly formed alliance of local government working together to have all levels of government acknowledge and respond to the climate emergency with the urgency that is required based on scientific evidence.

The Global Covenant of Mayors

We are a member of the Global Covenant of Mayors (GCoM). More than 10,000 cities across six continents and 138 countries are part of the GCoM, the world’s largest cooperative effort among mayors and city leaders to reduce carbon emissions and prepare for the impacts of climate change.

GCoM cities are united in their shared goals to increase access to renewable, clean energy, build healthy environments and promote initiatives and best practices that will accelerate the fight against climate change.

TAKE2 is the Victorian Government’s pledge program that shows every Victorian how to take action on climate change. We’re one of 22 Victorian councils to take up their pledge to keep the temperature rise under two degrees and transition to zero net emissions.

What can I do to reduce my carbon footprint?

Sustainability Victoria - You and Your Home