In response to recent events locally and internationally, Glen Eira City Council partnered with the Anti Defamation Commission to host a breakfast forum to show its support for our ethnically, culturally and religiously diverse community and gather support to take action against racism and discrimination in all its forms. 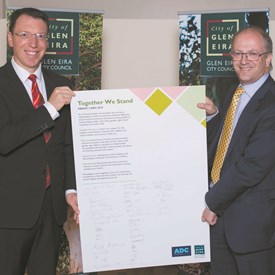 Glen Eira Mayor Cr Jamie Hyams said the purpose of the Breakfast Forum was to promote inclusion for everyone, particularly related to ethnicity, culture, religion or belief.

“The Forum was important in helping us gain shared understanding of the impact that discrimination and hate has on some members of our community,” he said.

Anti Defamation Commission Chair Dr Dvir Abramovich said at a time when we are witnessing a dramatic upsurge in hate, racism and antisemitism across our nation, this timely gathering was more important than ever.

“I am grateful to the leadership and vision shown by Council and confident this Forum will send a message of strength and unity to the community at large,” he said.

Keynote speaker, cross-cultural consultant Tasneem Chopra, spoke about what role councils can play when religious and faith-based denominations feel they are being persecuted globally.

In response to racial and religious intolerance, the following Together We Stand Joint Statement of Commitment was also signed by Cr Hyams, Dr Abramovich, Ms Briggs and invited attendees.

As community leaders we recognise that we have a responsibility to build a society that celebrates difference and promotes harmonious coexistence among peoples of varying religious faiths, ethnicities, genders, ages, sexual orientation and walks of life.

Together We Stand, united in our support for the freedom of individuals to express their religious and cultural beliefs and practices in safety, by:

We pledge to work together across our communities, to embrace an Australia which revels in its diversity and ensures dignity and opportunity for all.

Tuck Shop Take Away has been named Glen Eira City Council’s Shop of the Year.

Sick Figs were crowned the winners of the 2018 Sounds of Glen Eira.