Glen Eira City Council will be able to move ahead to design the Elsternwick Cultural Precinct on Selwyn Street after a Victorian Civil and Administrative Tribunal (VCAT) decision this week. 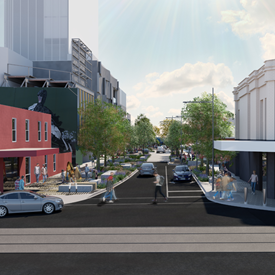 VCAT granted a planning permit for the former ABC site at 10–16 Selwyn Street, Elsternwick, which allows the demolition of existing buildings and the construction of two mid-level towers over a basement, including apartments, shops, a community facility and a supermarket.

In its decision the Tribunal made it clear that the final outcome on the future design of the Council’s Elsternwick Cultural Precinct for Selwyn Street was with Council.

Glen Eira Mayor Cr Jim Magee said VCAT had always maintained that the site could accommodate a significant development as long as it was appropriately designed.

“It’s great that there has now been resolution to this application which appears to have fairly considered the views of all parties in the process,” he said.

“Council is now excited that it can get to work delivering a cultural precinct.”

Importantly, the Tribunal noted that the development will still be acceptable whether Council allows one or two turning lanes from Selwyn Street onto Glenhuntly Road.

This is the second time the development matter has been before the Tribunal. Council refused the first planning application and the decision was upheld by the Tribunal due to the height of the southern tower and the visual impact when viewed from Glenhuntly Road.

The latest application sought permission for a similar proposal but with a lower 10-storey southern tower. Council supported a revised proposal with a maximum tower height of nine storeys and increased building setbacks from the south and the adjoining residential area.

In granting a permit, the Tribunal required the deletion of three levels from the southern tower with increased setbacks, bringing it down to six storeys.

The reason for this was to reduce the visibility of the southern tower from the backyard of the historic house, known as Glenmoore, and the number of apartments that face this historic property.

Tuck Shop Take Away has been named Glen Eira City Council’s Shop of the Year.

Sick Figs were crowned the winners of the 2018 Sounds of Glen Eira.