Stephen Haley is a renowned Australian artist, celebrated for his distinctive and extraordinary creative vision. In a career encompassing over 25 solo exhibitions, participation in over 120 national and international curated group exhibitions, international residencies, and public commissions, Haley has developed a significant profile as a highly accomplished and innovative artist. As described by the exhibition curator Diane Soumilas in the 2012 survey exhibition catalogue, “Stephen Haley’s artistic practice has teased the boundaries between real and virtual space for more than two decades to convey powerful messages about the rapid contemporary urbanisation, suburban alienation, consumerism, environmental degradation and a continually evolving digital world. Hayley’s exploration of the conditions of virtuality and simulation and the constructed spaces that exist within the virtual realms of the computer is fundamental to understanding his practice.”

The major survey exhibition traced the evolution of Haley’s major thematic concerns over the last six years of his career, through selected key works including a new series, comprising a large-scale virtual projection, a retroreflective drawing and lightjet photographs, bringing the exhibition up to the present. The exhibition featured the large-scale video projection Driveby 2011, where “Hayley solicits the viewer’s active and physical engagement in a chilling futuristic virtual environment, witnessed as though through a wide-angled windscreen. Here is There 2011, a retroreflective wall drawing of two mirrored suburban homes, invites dynamic and shifting viewing points as the spectator moves through space and engages with the work. The mirrored forms shift, move and actively change with the optical effects of the light reflecting from the Driveby video on the opposite wall.”

“His projected installation Repose 2012 embodies the viewer in sequential mirrored forms and the beauty of a repetitive, light-filled, futuristic living environment, transporting us into enigmatic zones of increasing technical complexity. We are Somewhere About Now immersed in the virtual realms of simulated spaces and mirrored worlds that echo, multiply and resonate with the anxieties and uncertainty that prevails in urban life. Haley’s simulated virtual worlds powerfully reflect on rapid environmental devastation and consumer excess, relentless urbanisation and the transformative power and impact of digital technologies on contemporary life and existence, alluding to a potential threat or global disaster, offering the viewer unsettling scenarios to engage with and contemplate for the future.” 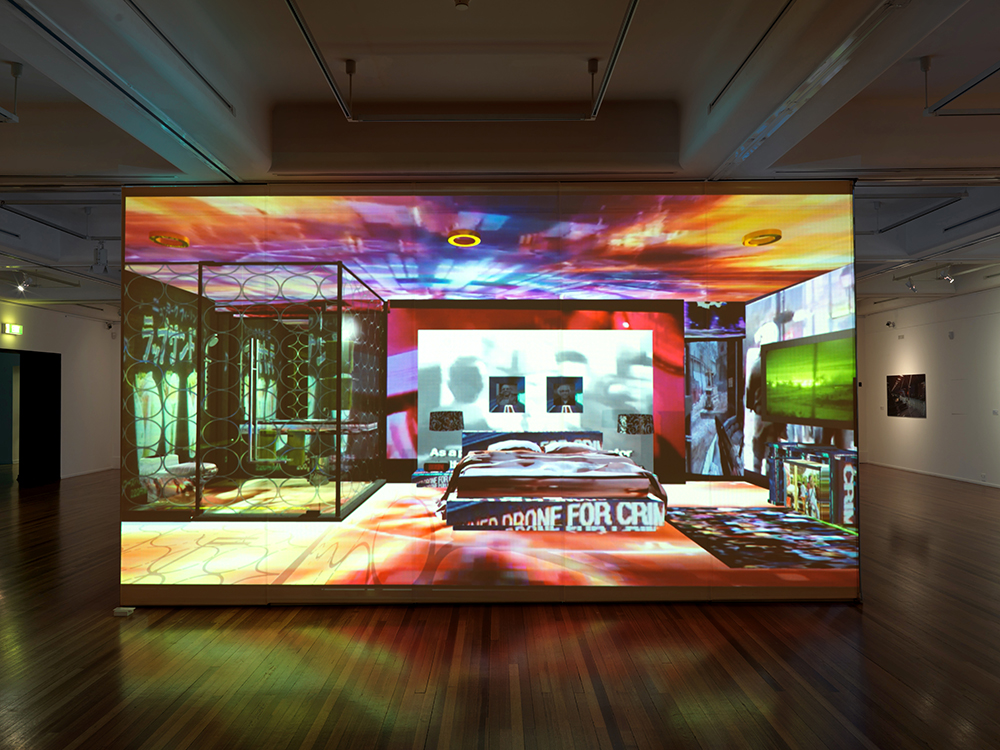 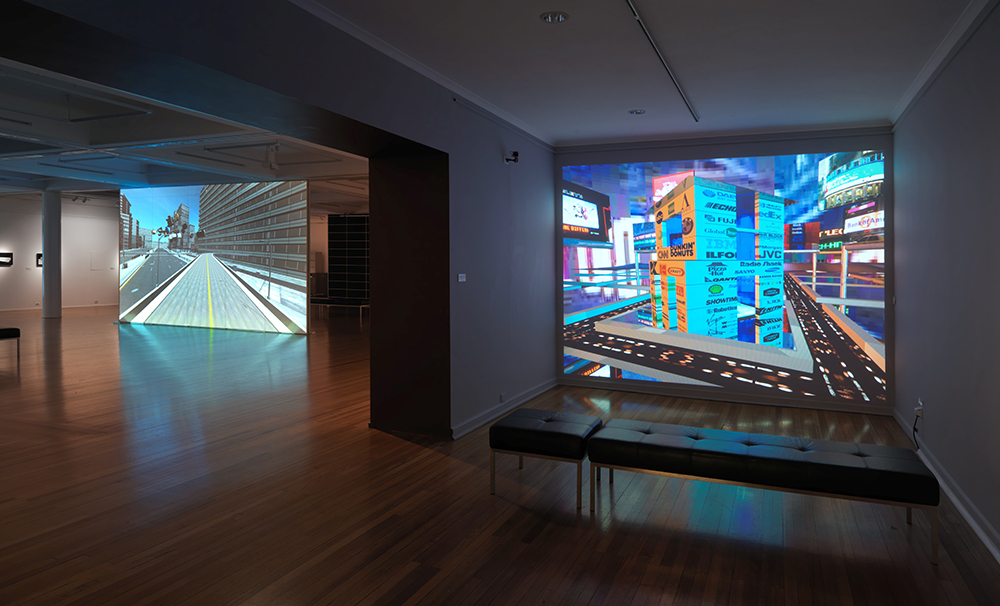 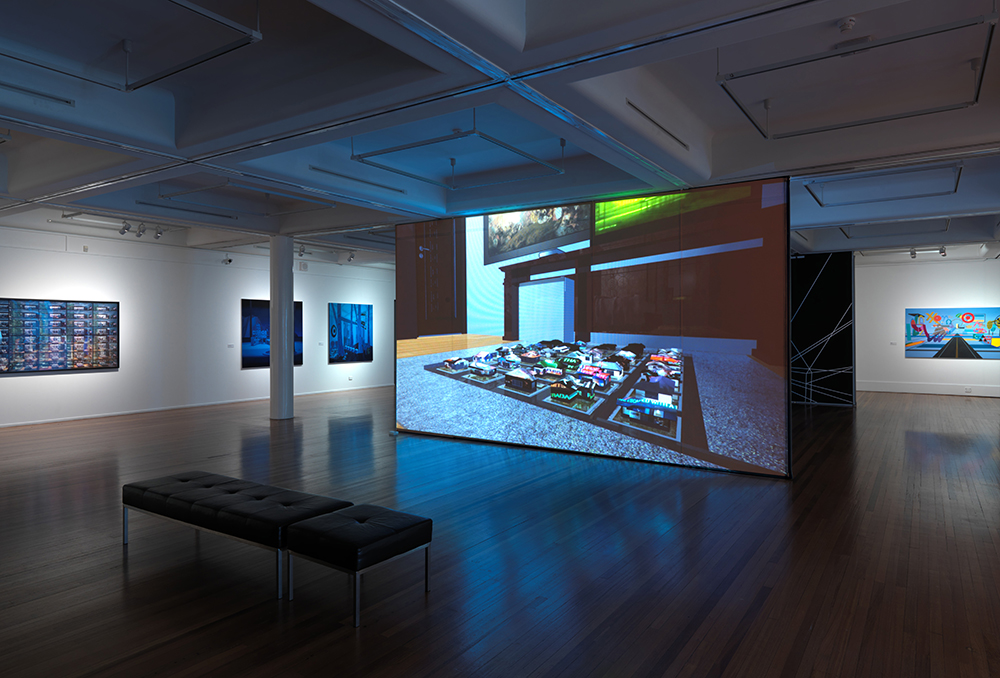 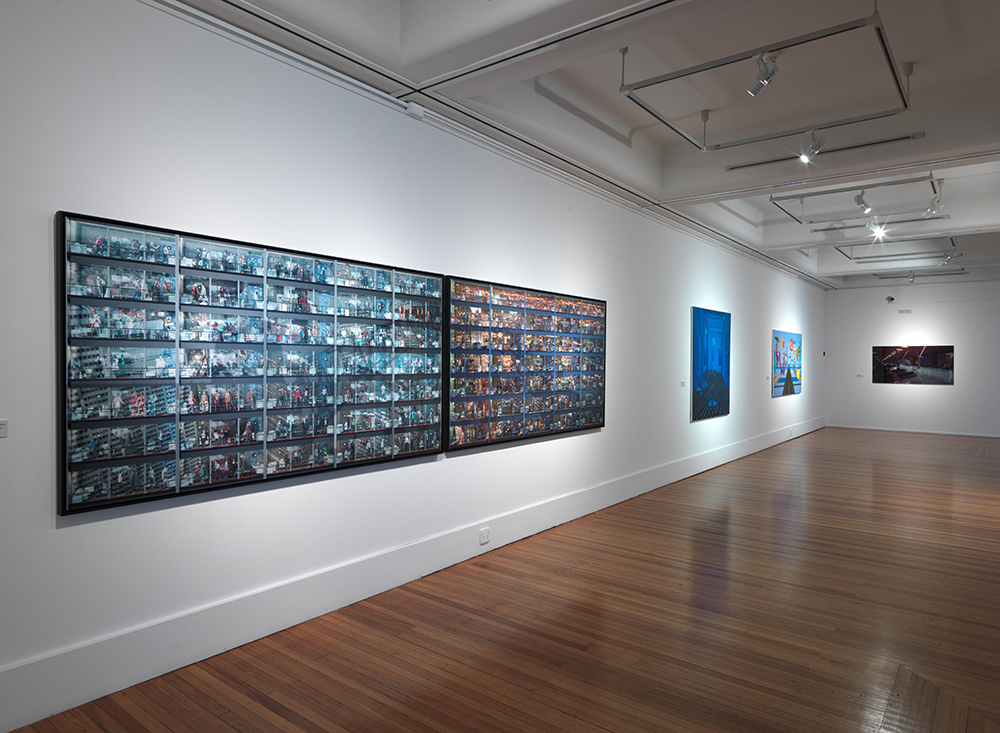 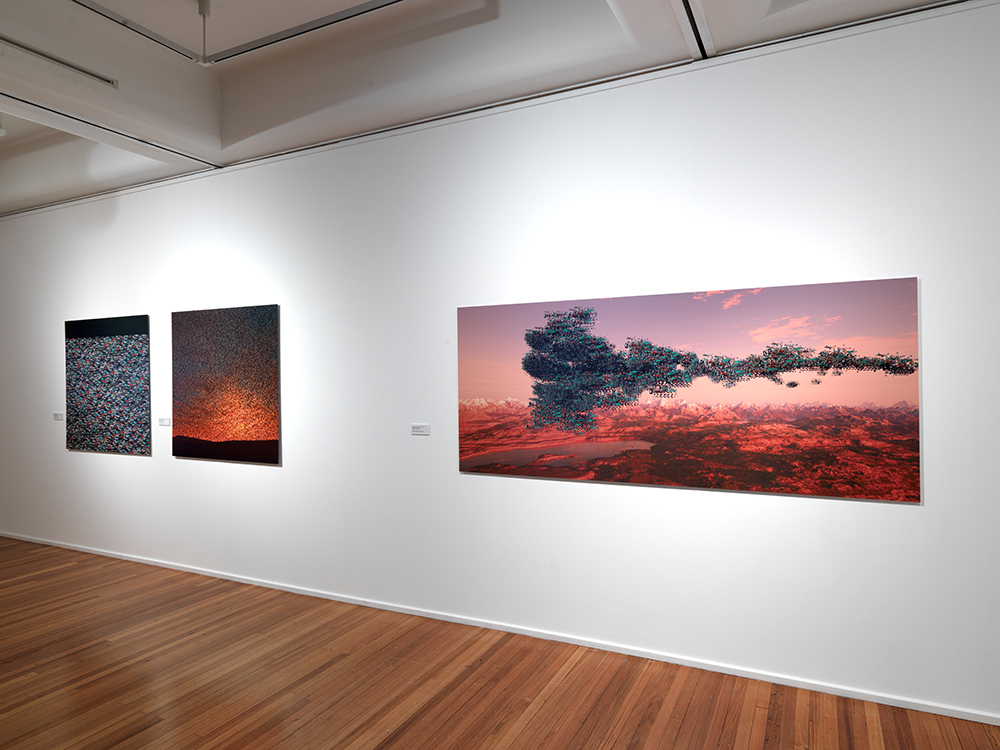 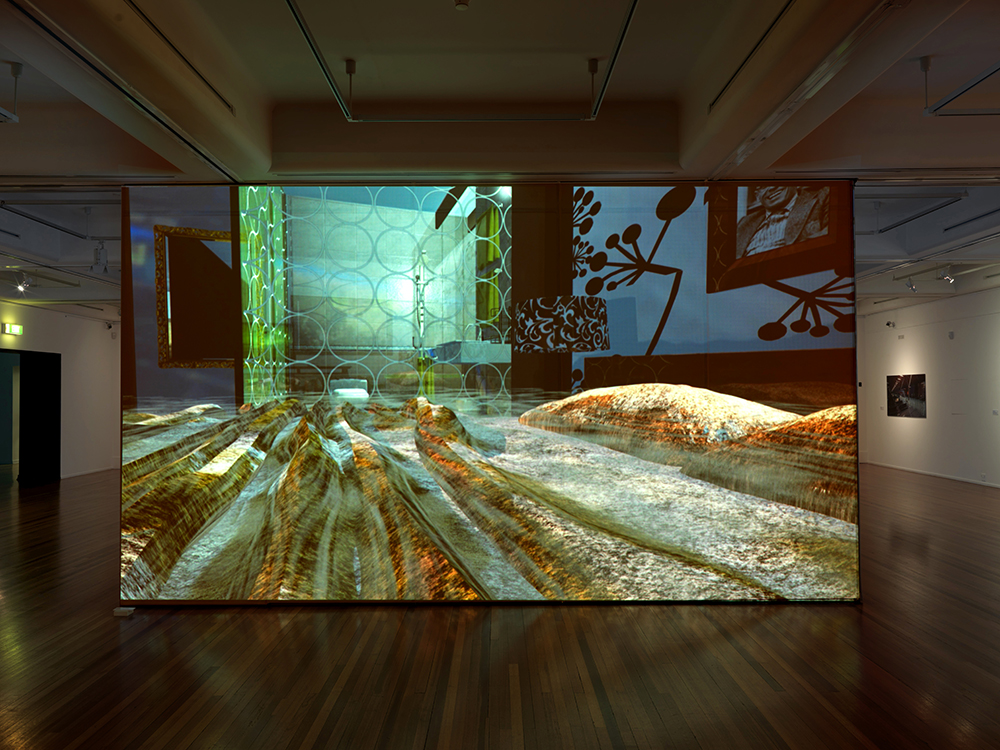 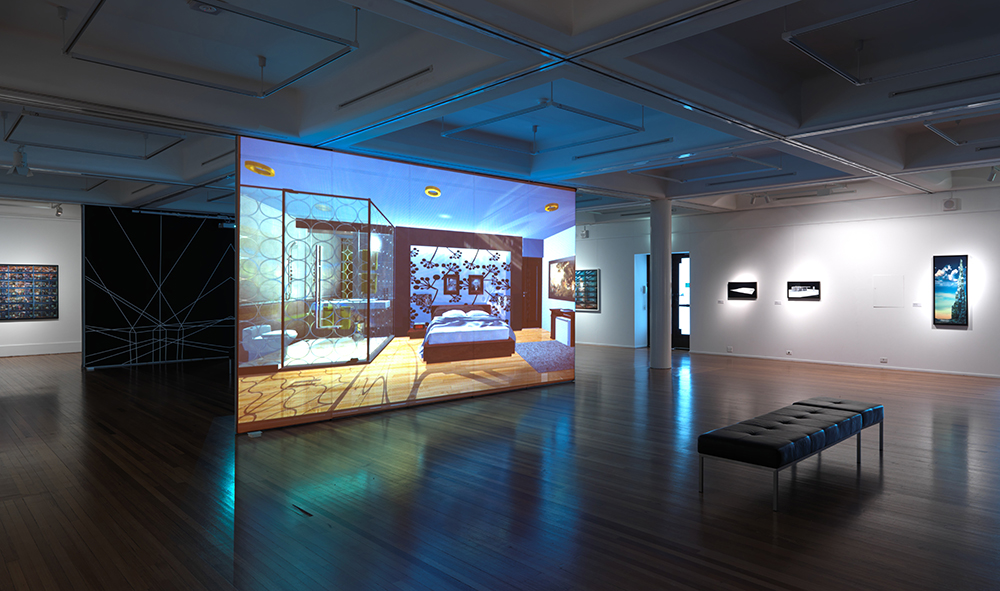 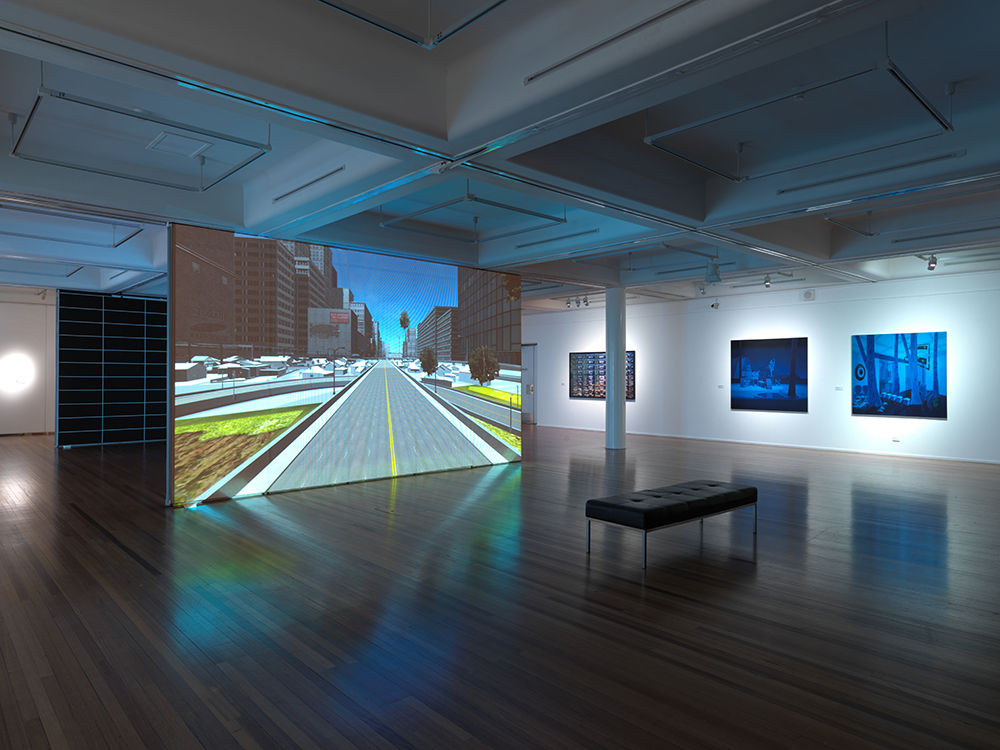 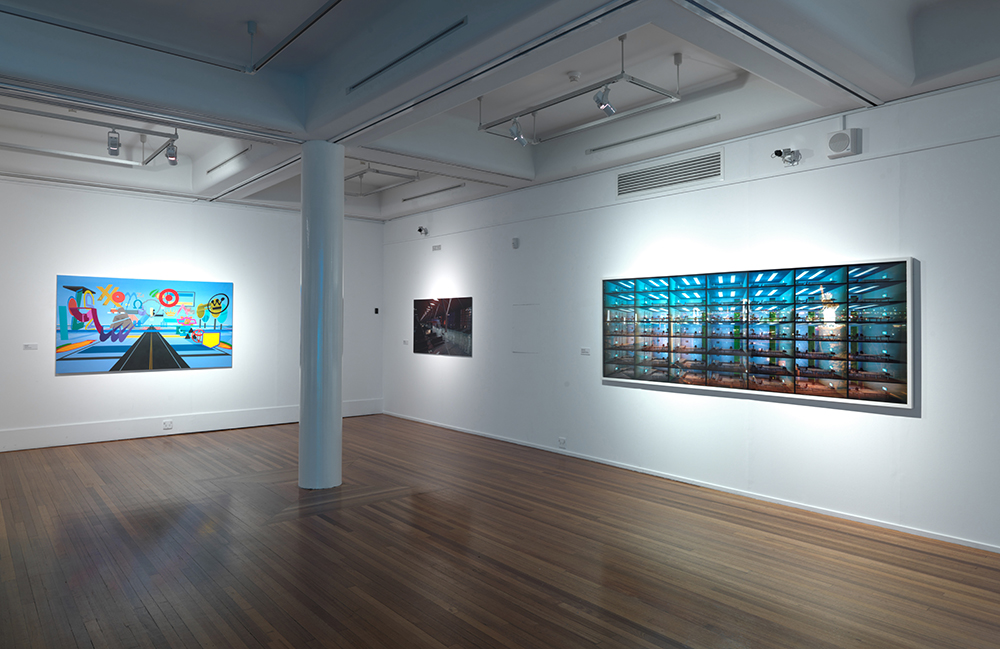 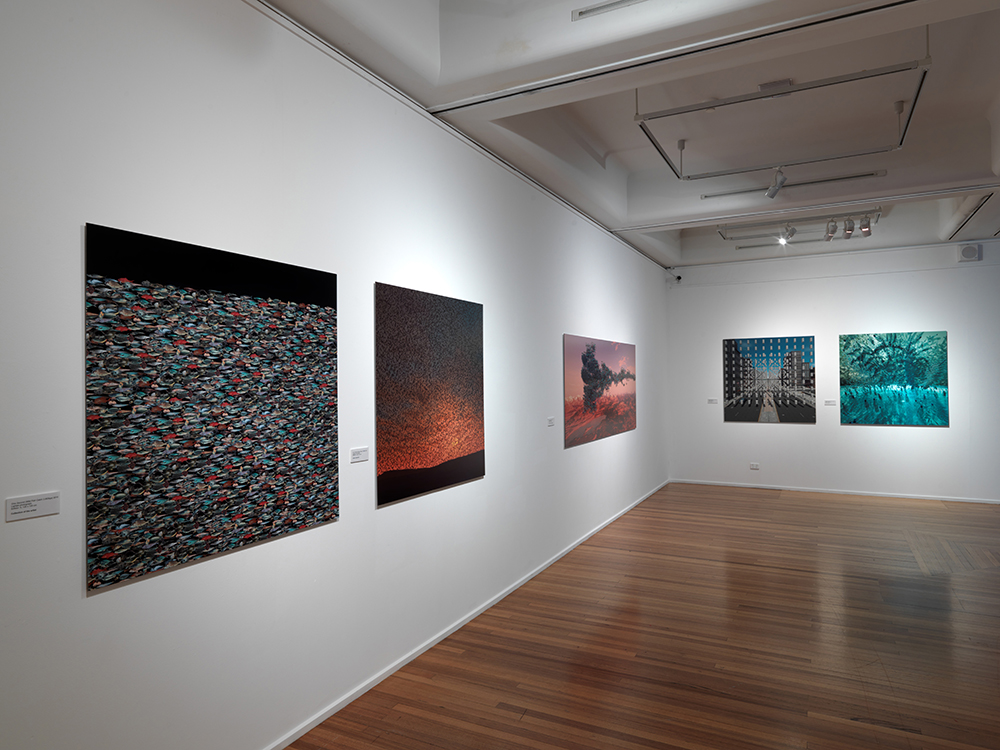