On Sunday 6 September 2020, the Premier announced Victoria’s COVID-19 roadmap to reopening. Many of the Stage 4 restrictions remain in place but there have been some slight changes. Find out more here.

In works such as Meaner than Yellow brooch 2009, from Council’s art collection, Baines explores positive and negative space and sophisticated abstract line work. 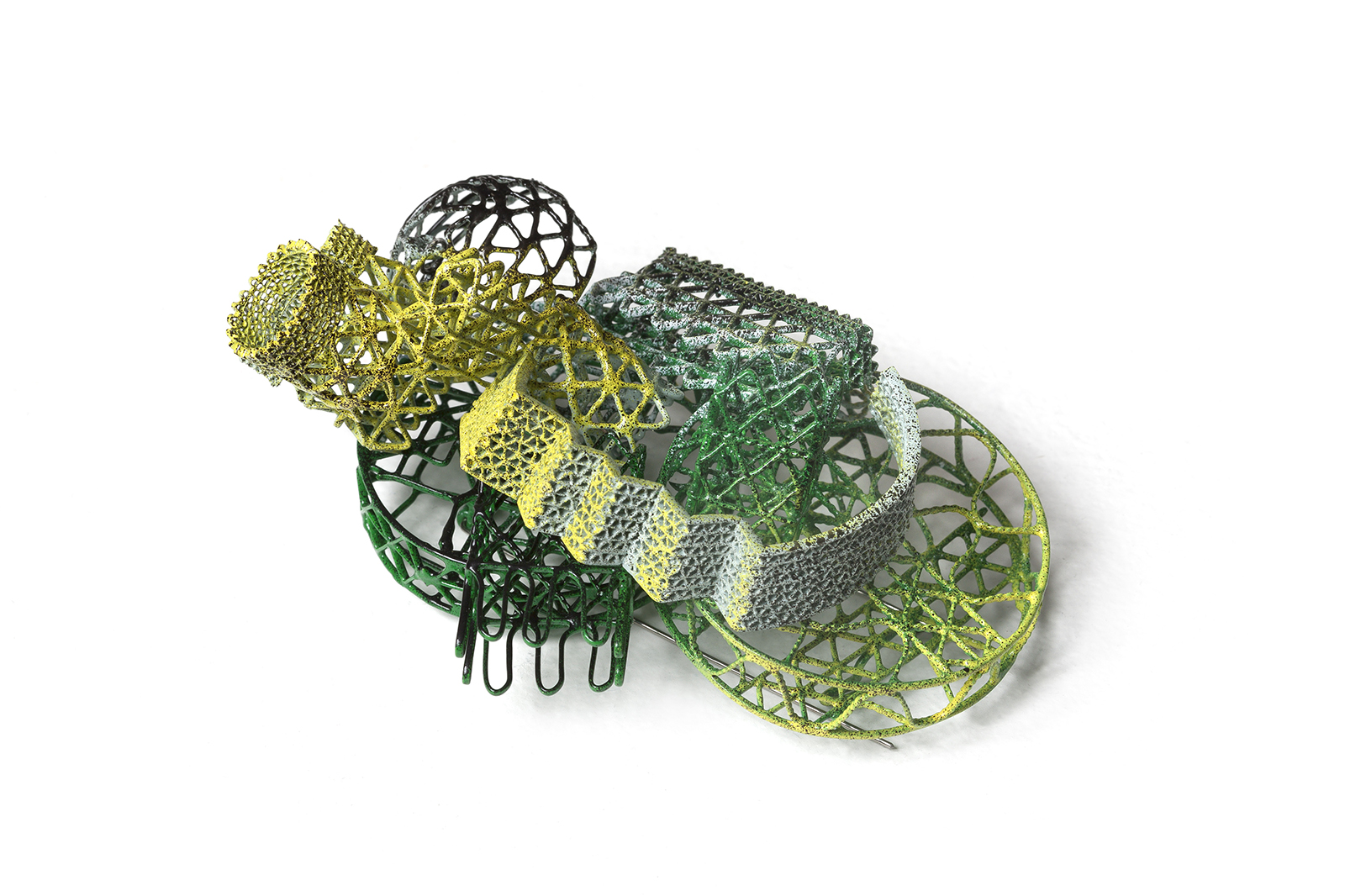 Open linear structure empowered with colour referencing the statement on the condition of red by Claes Oldenburg: “I have just had an insight, red is redder than green, meaner than yellow, and bloodier than black” Claes Oldenburg, Notes, New York, 1961

Robert Baines is one of Australia’s most significant and influential jewellers and goldsmiths. He has made an important contribution to international historical scholarship, aligning his practice with ancient goldsmithing and silversmithing techniques for more than four decades, reconstructing elaborate jewellery of remarkable historical accuracy. His exceptional technical skills and extraordinary creative output are well documented.

As Curator Diane Soumilas noted: “Regarded as a maverick in contemporary jewellery practice, Baines plays with history, challenging notions of authenticity and what is real, provoking the viewer through playful, modern-day interventions, merging the past with the present.”

With a career spanning more 40 years, he has exhibited widely in Australia and overseas since 1977, and received numerous prestigious international and national awards including the Bayerischer State Prize (2005) Germany and Friedrich Becker Prize (2008 )Germany, and the Cicely and Colin Rigg Craft Award, (1997) National Gallery of Victoria. He was the recipient of the 2010 Living Treasures: Masters of Australian Craft series, and recently participated in a panel discussion in conjunction with the exhibition Jewelry: The Body Transformed at the Metropolitan Museum of Art, New York, USA. Recent international exhibitions include Intimate Friendships: Robert Baines, Gallery Loupe, NJ, USA, Robert Baines: Living Treasures and Fabulous Follies, Massachusetts College of Art and Design, Boston, USA in 2018 and Fake News and True Love: Fourteen Stories by Robert Baines, Museum of Arts and Design, NYC, USA in 2019.

This work was included in the Council curated survey exhibition Robert Baines: A Visible Likeness presented at Glen Eira City Council Gallery in 2011.  As the exhibition curator Diane Soumilas noted: “The exhibition featured a selection of his compelling and intricately constructed jewellery and large-scale sculptural objects, celebrating his exceptional technical and conceptual skills and the creative achievements of one of Australia’s most iconic jewellery practitioners.”

Baines is Adjunct Professor, School of Art, RMIT University and was Professor, Art, Gold and Silversmithing, School of Art, RMIT University. His work is represented in prestigious national and international museum collections including the National Gallery of Victoria, Melbourne; the Powerhouse Museum, Sydney; National Gallery of Australia, Canberra, the Victoria and Albert Museum, London; the Metropolitan Museum of Art, New York; and the Musée des Arts Décoratifs, Paris.